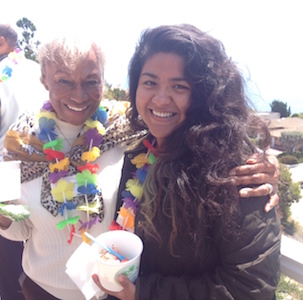 Jazmin Valenzuela offered us this testimonial to the value of a community college education. Jazmin is currently a senior at UC Santa Barbara. At left, she was our guest speaker at a fundraiser in 2015, pictured here with Connee Freeman, former Urban Foundation board member.

"After high school, I begrudgingly began attending community college. My plans of going to a four year school didn’t pan out and I felt defeated. I was angry because I felt like I had to settle for less, and upset because I thought to myself, “this place is for kids who don’t know where to go or what they want.”

"Once I started attending community college, I realized my perception of it was completely wrong. Everyone there had their own story and different goals for themselves. I met people from all walks of life: mothers who came back to school in hopes of a better education, students, in a  similar position as me, looking to transfer out, elderly who just wanted to learn a thing or two, and even college graduates who came back to take a few classes for leisure. My time at CC really humbled me, and I am grateful for it. After two ambitious years, I transferred to the University of California - Santa Barbara and plan to major in Psychology and minor in Philosophy.
Throughout those two years, Kid City has been my anchor. Alma, Laura and Anne have been nothing but supportive of me. I always feel comfortable here; it is an inclusive space that is warm and welcoming to everyone who seeks it out. As a first generation student, I have struggled dealing with the pressure of doing well for my family, being the representative of my community, pursuing what makes me happy and diving in head first into a foreign experience to achieve my dreams.
Following the end of my first year as a transfer at UCSB, I knew I had to come back to Kid City. I decided that I wanted to give back the same love and support, that was given to me, to the next generation of students. I became a summer intern here. I began a cooking class for college students to teach them how to eat healthy while on a budget. I also collaborated with other interns on an art class, helping students express their creativity in a number of ways. What I was most excited to work on were the office hours I held once a week for community college students. The purpose of these hours were to answer any inquiries, regarding the community college experience, that current CC students had.
Do you like this post?
Tweet