Striving for a Better Future 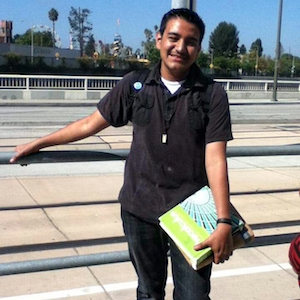 Kid City plays a big role in helping students pursue a higher education, whether through SAT tutoring, personal statement revisions, or simply by helping an individual fill out a college application. But what then? What happens after a student is accepted and settles in?

Jason Granados has been an active member at Kid City for over 7 years and recently graduated from UC Santa Barbara. (Left: 11th grader, Jason, carrying his pre-calculus books)

During high school, Jason describes himself as the kid with the 200 pound, overstuffed backpack. He loved learning, focused heavily on academics, and even called himself the ‘teachers pet’. Although education was important to him, Jason’s end goal after high school was to immediately start working. As the oldest child in the family, Jason was under pressure to graduate and start bringing in income immediately. Although supportive and hard working, Jason’s parents had limited knowledge of the education system, and would frequently ask “cuando vas a empezar a trabajar?”. 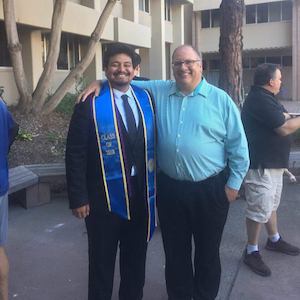 After being introduced to Kid City during his junior year in high school, Jason was awakened to possibilities which included becoming the first person in his family to apply and get into college. Kid City taught Jason the importance of asking for help, particularly from professors which eventually earned him six different internships within his field. Jason researched the effects of deforestation in Guatemala on the surrounding communities, reported the impact of new government legislation on immigrant HIV patients, and conducted an oil study on the Santa Barbara beaches. Jason (left) is pictured next to one of his Geography professors (right), Professor Daniel R. Montello, from UCSB.

When Jason received his first care package from Kid City he felt proud. “I had the urge to show everyone so, I picked up the box, got on my bike, and rode around campus showing it off. I even remember riding to my friend’s dorm, which was across campus, to show him everything I had received.” Although small in gesture, care packages make a huge impact on college students as they come with school supplies, such as notebooks, folders, pens, pencils, snacks, and so many more necessities that students really appreciate. To Jason, his care package showed him that, although 96 miles away from Santa Barbara, he had a support system back at Kid City, that cared about him and wanted to see him succeed.

Today, Jason is a UCSB alum with a degree in Geography with an emphasis in Geographic Information Systems Sciences (GIS) and a minor in Educational Studies. He is currently looking for work in his field, where he hopes to collect data from natural catastrophes and manage its impact on surrounding communities, as well as, continue his education and pursue a master’s.

Majoring in Psychology and Social Behavior/ Global Cultures at UCI