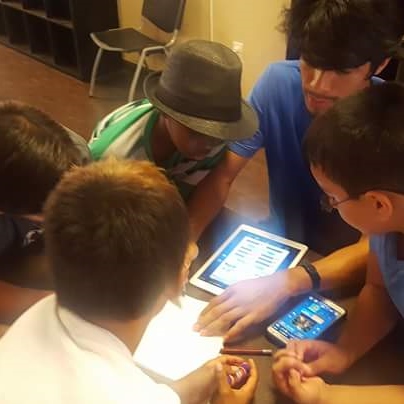 LA Native, Ricardo Alcantar, found himself sharing a living space with three other interns this summer. One from Los Angeles, one from Massachusetts and one from Mississippi. Although from different backgrounds, they came together to be part of the Urban Foundation’s  Summer Urban Internship.

The internship is designed with interns stationed in different parts of Los Angeles to engage in urban ministry or in other words, working with local communities. Ricardo was placed at Peace Center at United University Church, a four week Peace Camp program for students ages five to 15  from low-income minority communities like South Los Angeles, Koreatown, and University Park. Focused on older kids from ages 8 to 10, Ricardo implemented the camp’s mission with everyday activities. The objective according to Ricardo is to “teach them about self-awareness, tolerance and positive conflict resolution.” Ricardo lead meditation circles, a wide range of projects like slime making, ice cream making, and photography, field trips, outdoor activities and much more.

Ricardo originally learned about this internship last year, through his friend and Kid City participant, Saul Nolasco. Hesitant about his schedule, it was not until this year that Anne Hawthorne, the Urban Foundation Executive Director, encouraged him, he decided it was time.

After two weeks of training, Ricardo was at Peace Camp from 9am to 2pm in classes with his students. A day in the life started with breakfast and an opening circle where the students meditated, next came arts & crafts based on the subject of the week, lunch, an elective class and finally a closing circle accompanied by a farewell song. The subjects of the week were different geographical locations:Los Angeles, Korea, Belize, and The Democratic Republic of Congo.

One of Ricardo’s most memorable weeks was Korea. For this subject, he took his students to Koreatown to witness the diversity in people and food. Together they visited a Korean market with foods the students had never seen before. This brought joy to Ricardo because his students were happy to be exposed to something new; showing them that culture goes beyond what they know. He reflected on his childhood and thought about the lack of food diversity he had. Ricardo wanted the kids to limit bad foods with too much sugar, sodium, oil, etc.

In addition to the market, Ricky remembers taking his kids to Seoul International Park, a local jungle gym. There he noticed that other children were playing roughly and rudely towards each other. As he observed this, he noticed that his students told the others to “act nicely” or to “treat people with respect.” It became obvious to Ricardo that his students were learning positive ways to fix negative situations without losing control. All of this happened without him having to interfere; he is proud that “the kids can do this on their own now.”

Just like the kids learned this summer, so did Ricardo. Aspiring to be a teacher, he now knows which ages he wants to work with. Although not the age range he was working with because they are “bursts of energy,” he still wishes to share knowledge with younger people. Most importantly, he learned that no matter how much older a person is than someone else, they can still be taught something new. These kids showed him that it is never too late to learn to practice peace. As everyone sang the farewell song at the end of the day, his favorite line “let all around us be peace” taught him to be strong in tough situations.  Outside of the classroom, his fellow Urban Interns showed him that although people come from diverse backgrounds, they can still coexist.