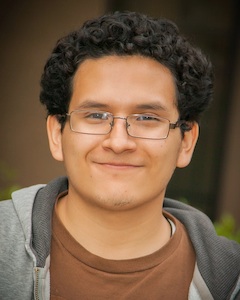 We are proud of every single student at Kid City-- from a student doggedly pursuing his diploma at community college, to those excelling at UCLA and UC Berkeley.  This year, Kid City has several students planning to enroll in private colleges, including Yale, Fordham, and Elizabethtown.

Jose Lopez comes from a family of five that has an annual income of less than $20,000. His mother is a homemaker and his father is a garment worker who gets paid by piece. They live in a 250 square foot room, with two bunk beds, a folding table, and one folding chair.  When Jose was little he visited his father at work and was impressed because his father sewed so fast. His father knew he could do better.

After his family goes to sleep, Jose pulls out the table and chair, and studies for his advance placement classes. He has earned above a 4.0 GPA and, thanks to coming to Kid City's SAT study groups, scored a perfect SAT math score of 800. Jose has played trumpet in Kid City's jazz band, as well as the all-city jazz band. He has taught music to younger students at Kid City, and completed Kid City's work readiness workshop.

Jose was recently accepted to Yale, and this fall he will join the Yale class of 2018.

At Kid City, we do not have sufficient resources to fill all the needs of every student. Instead, we try to identify where we can make the biggest difference for each person. Jose didn't need academic support, but he was unsure about applying to private schools. Program manager Laura Cuellar knew he was ivy league ready, and on her own time, drove to Fresno to introduce Jose to the Yale dean of admissions, who was there with the Ivy League Project. Laura carefully noted the dean’s advice, and helped Jose edit his application so that each point the dean made was addressed.

According to the New York Times, “a child born in the bottom quintile of the income distribution has just a 5 percent chance of moving up to the top quintile without college. The chance of making it to the top nearly quadruples if the child gets a college degree. But currently, the proportion of children from low-income families who obtain a college degree is low — around 9 percent — compared with 50 percent of children from affluent families.” (Peg Tyre, Improving Economic Diversity at the Better Colleges)

We are proud of Jose, and of Kid City staff, who improve the chances for students like Jose.