* Currently looking for sponsors for Ultreya! 2017, when we'll have even more graduates to celebrate! Currently looking for underwriting sponsorships for $2500, $5000, and $10000! Please donate here or contact Anne Hawthorne at the Urban Foundation ([email protected]) for more information. Read on about this year's party! 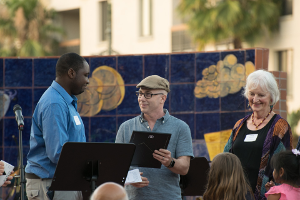 Each of our college graduates' remarkable achievements inspire young adults and teens with academic aspirations to reach for goals, take heart and carry on during their journey into adulthood. Kwesi Essilfie spoke about the early days of Kid City, when it was just a couple of unfurnished rooms with a few neighborhood and church kids who needed a safe place to be kids on weekday afternoons. Alma Sanchez spoke about the awareness she gained of her own struggles as a first generation student helped her to surmount obstacles, complete her degree, and help others like herself. Kofi Essilfie's last-minute arrival, after driving up from his first week on-the-job at Qualcomm in San Diego, added an impressive dramatic turn at the end of the program.

A heart-felt thank you to everyone who attended, volunteered and donated, and made Ultreya 2016 a fun and successful evening.

Special thanks to LA Photo Party and DJ Danno for putting the party in Ultreya!