Looking back to 2015: the Urban Internship launch!

Internship in Urban Ministry: Summer of 2015

The United Methodist Internship in Urban Ministry launched in the summer of 2015. The program, an annual urban learning experience for young adults who want to make a difference in the lives of others through a program of spiritual growth and service, is now in its fifth year. The two-month pilot summer session began in mid-June, 2015. Interns lived in intentional community at Orchard House near USC, and worked full-time in an urban ministry matched to their interests. Interns also met with a spiritual mentor at least one hour a week, and participated in the life of their local United Methodist Church. 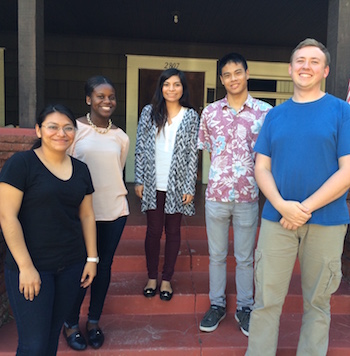 Sonia Rodriguez was assigned to United University Church and its summer Peace Camp. "At times, when some of us think of missionary work, we look at those surroundings that are outside of us, we look at places like third world countries and think about what we can do there to make a difference in the world. Working in ministry in this urban environment has taught me that we don’t always have to look too far out of our own environments to find places or people in need. There are people within our own community who need our help and are often overlooked.

Tommy Elrod worked with Pastor Gary Williams on the Mass Incarceration Task Force and attended Hamilton United Methodist Church. "I learned more about the South LA culture and how important the church is in an urban setting than I ever would have from a classroom or book. This nudged me in the right direction. I learned how difficult it is to be a pastor with a joint-charge at two churches, especially in the midst of gang-related violence. The members of the church shed light on the absolute solace and sanctuary that the church provides in the black community."

That first summer, program partners included the Young Clergy Initiative at Claremont School of Theology, West District, California Pacific Conference, and California Pacific Higher Education and Campus Ministry Council. All of these institutions and the individuals within them have very generously supported the program since.

Rev. Allison Mark, served as the first program director. Her previous experience with intern programs, and her enthusiasm for youth and young adult ministry helped make our dream a reality. Rev. Brian Gaeta-Symonds, Campus Engagement Minister at United University Church provided a weekly group reflection with the interns, and oversaw the communal living at Orchard House. In 2017 and 2018, Rev. Matthias Peterson-Brandt co-directed the program with Rev. Gaeta-Symonds. We have been blessed with their continual guidance, along with members of the visionary Los Angeles Metropolitan Collaborative who conceived this program in 2010: Sheri Dunn Berry, Susan Stouffer, Rev. David Farley, Rev. Sandie Richards, Rev. Frank Wulf, Rev. Jennifer Gutierrez, and many others.